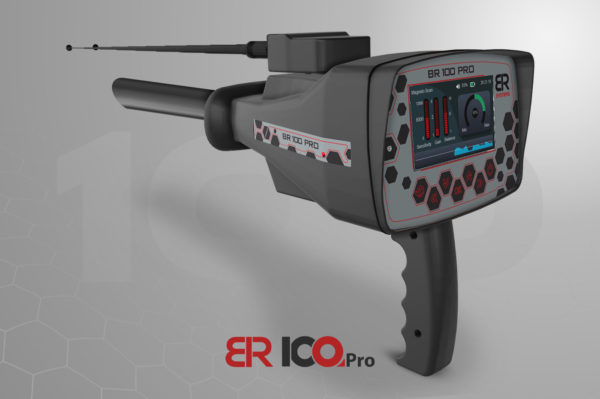 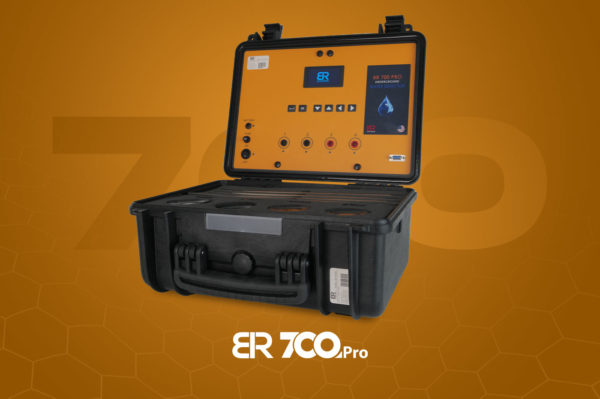 The most famous device in the world and the most widely used by prospectors for gold and precious metals underground, The Gold Step device, the previous version, has always been the master of long-range, most efficient and flexible detectors in detecting everything that is valuable in the ground for the past 7 years.

Through this successful scientific model, many prospectors and explorers around the world were able to reach their targets and achieve their will. Therefore, we are now putting in your hands the Gold Step Pro Max 2022, the completely new version, with new technologies and additions represented by newly invented technical means in our scientific laboratories.

The Gold Step Pro Max is the most important professional detector produced by our company. Therefore, we have developed and manufactured this device in a way that makes it the best and most widely used method among researchers and prospectors for buried treasures underground.

The user of the new Pro Max device can reach the valuable targets and precious treasures easier and faster than before, as this device provides all the techniques that the user needs to help him in most of the scans and vertical and horizontal detection and in line with all lands and terrain, as this device includes systems All-new imaging detection, in addition to other vertical detection systems and long-distance detection systems that characterize BR Systems. 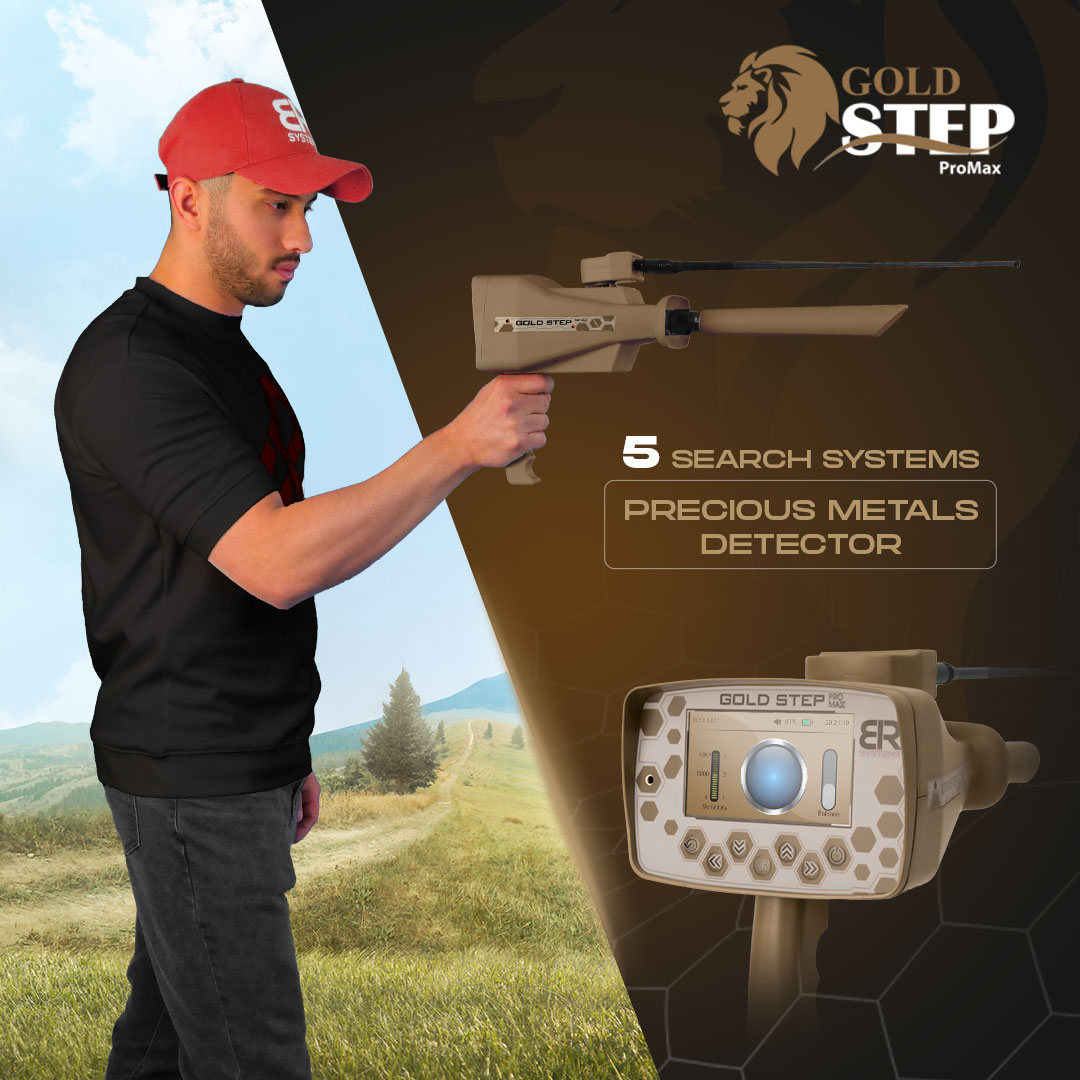 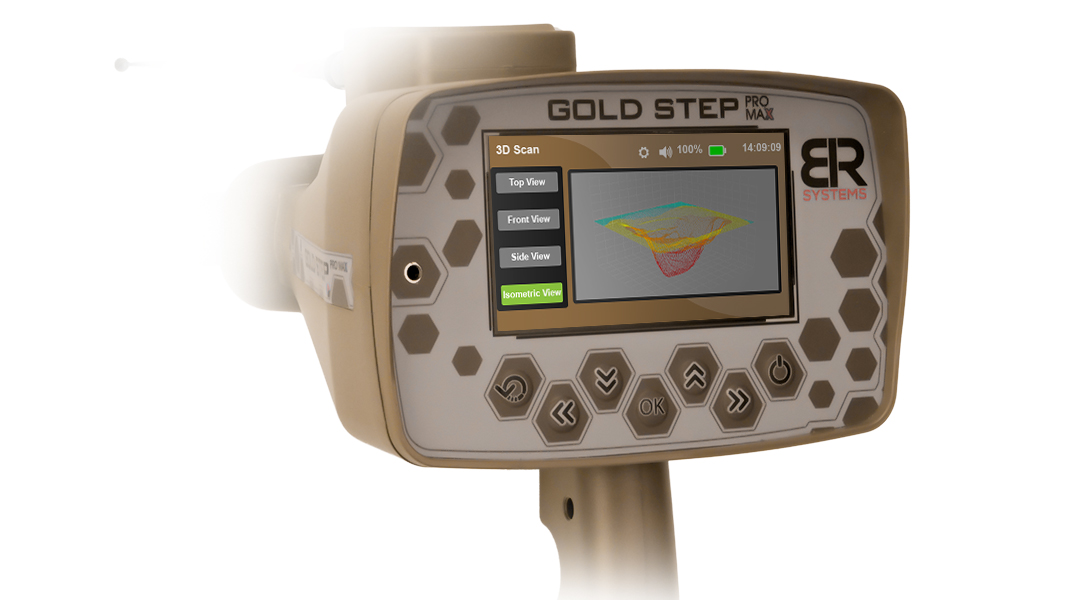 The treasure hunter and precious metals prospector can scan ground levels and clarify underground hidden objects in a 3D view that appears directly on the device’s main screen without the use of a laptop or tablet.

The 3D imaging system of the Gold Step Pro Max works on the foundations and new technologies newly invented by BR Systems in USA, so you can now now use a ground imaging scanning system with a completely new character and shape that is completely different from similar devices with accurate detection, clarifying targets and more easy to use.

The 3D imaging system detects up to 16 meters underground.

Determining the value and type of the detected metal through the value that the device shows on the screen, which varies from one metal to another.

Determining the depth of the detected targets and showing them on the system screen.

View the detected targets in 3D on the main screen of the device with the ability to move the image in several different sides to check the existing targets, know their sizes, and store the scan directly on the device.

Automatic Ground Calibration (AGC) with soil is an invention of BR Systems. The automatic balancing technology has been added to this system to accurately define the device on the soil before starting the scan process. Calibration takes place within seconds only. It helps the device to know the type of soil to be scanned, and this results in the device’s signals moving away Fully transmitted from all radioactive signals emanating from the ground, especially from metallic rocks and other similar rocks or mineral dust in general.

Power Max Scanner: All 3D scans are done with the new 55 Power max scanner, which is small in size and highly effective in sensing at great depths.

Controlling the required search space. It is possible to determine the required area for scanning (length and width) before starting the detection process in the device, due to the user’s choice of himself based on the area of land to be scanned. 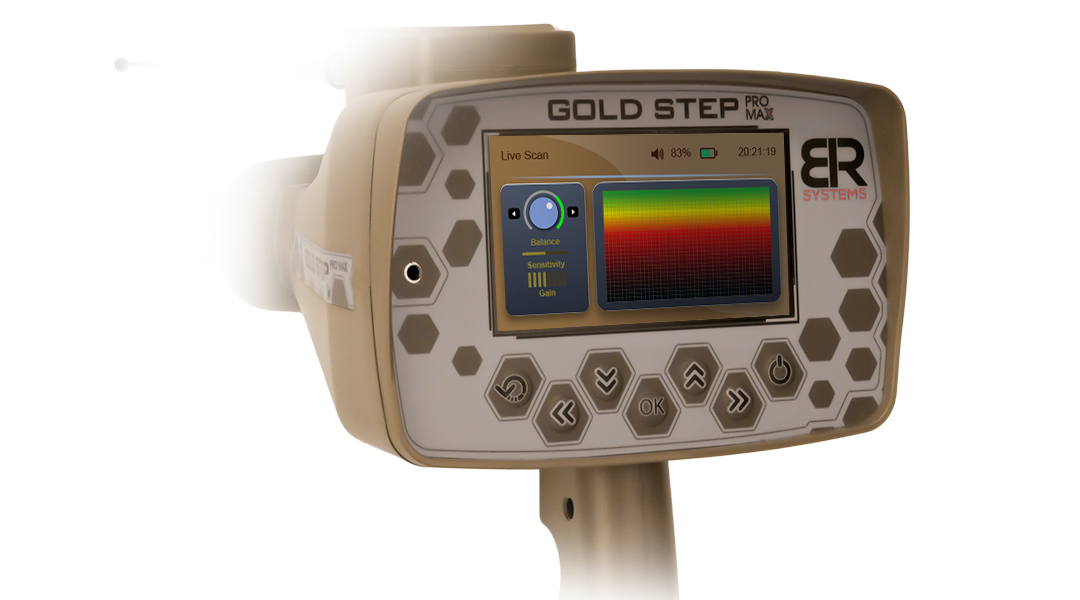 You can run the Live Scan system on the main screen of the device without the need for additional programs or laptops.

The user of this system can view live images in the form of an animated video and in real time on the device screen of everything that is hidden underground, including minerals, ancient burials, caves and tunnels. These discoveries are clarified in the form of special graphics that show the underground and begin to change when minerals or caves are discovered with a given size and actual parts discovered.

The Live Scan process is carried out without the need to specify a distance of length and width, as the user can walk the device immediately and for unlimited distances.

The automatic Ground Calibration AGC (an invention of BR Systems) with soil The automatic balancing technology has been added to this system to accurately define the device on the soil before starting the scan process and calibration is done within seconds only. Fully transmitted from all radioactive signals emanating from the ground, especially from metallic rocks and other similar rocks or mineral soils in general.

Power Max Scanner: All live scans are performed through the new Power max 55 sensor, which is small in size and highly effective at sensing high depths. 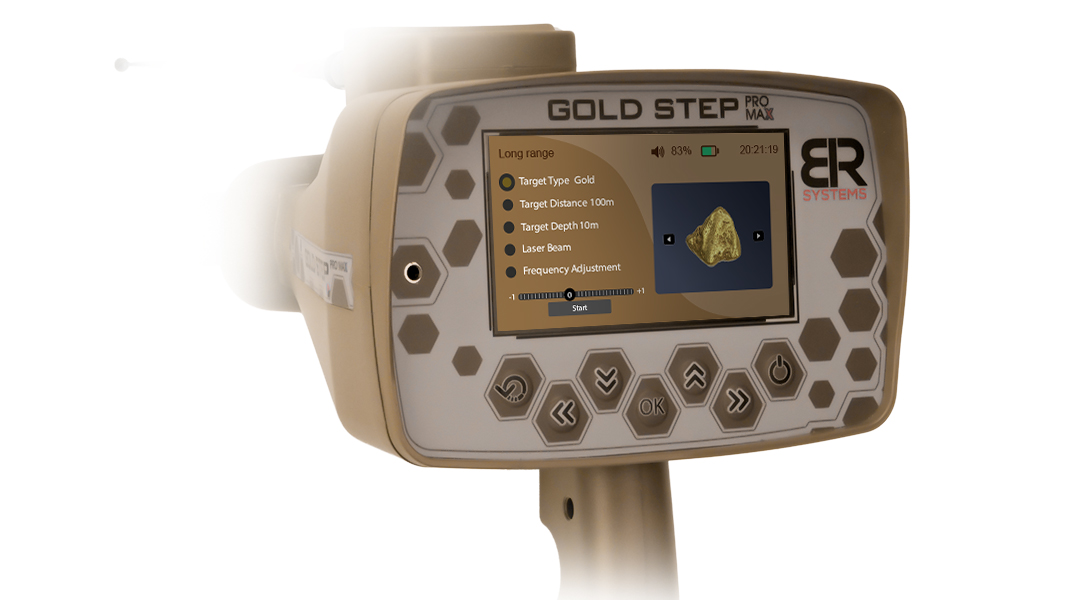 BR Systems has been working for ten years to develop and update long-range detection systems and reach the best and most effective techniques in discovering gold and treasures from long distances, through permanent experiments on the ground, so that its products are always at the forefront and most widely used by prospectors around the world.

The horizontal sensing technology (Long Range Locator) in the Gold Step Pro Max is based on scientific foundations and modern technologies developed and designed by BR Systems recently, as it is characterized by accuracy and high efficiency in detecting potential targets in the surrounding area in a short time. This system chooses the type of target to be detected, and the device will automatically start directing you towards the target in the area until it reaches you to the target center immediately.

This system is characterized by the speed of tracking targets from long distances of up to 2000 m, and this is done with high detect accuracy and 99% correct orientation.

It works in all different types of terrain and on all types of dry or wet soils.

This device is equipped with a new technology to filter the transmitted and received signals to maintain an accurate and pure signal away from any interference caused by ground radiation emanating from the rocks and the natural mineral interference in the soil. located in the area with great accuracy and away from any mineralization or radiation present in it. This allows the device to be used in all rugged areas and different terrain at all times. 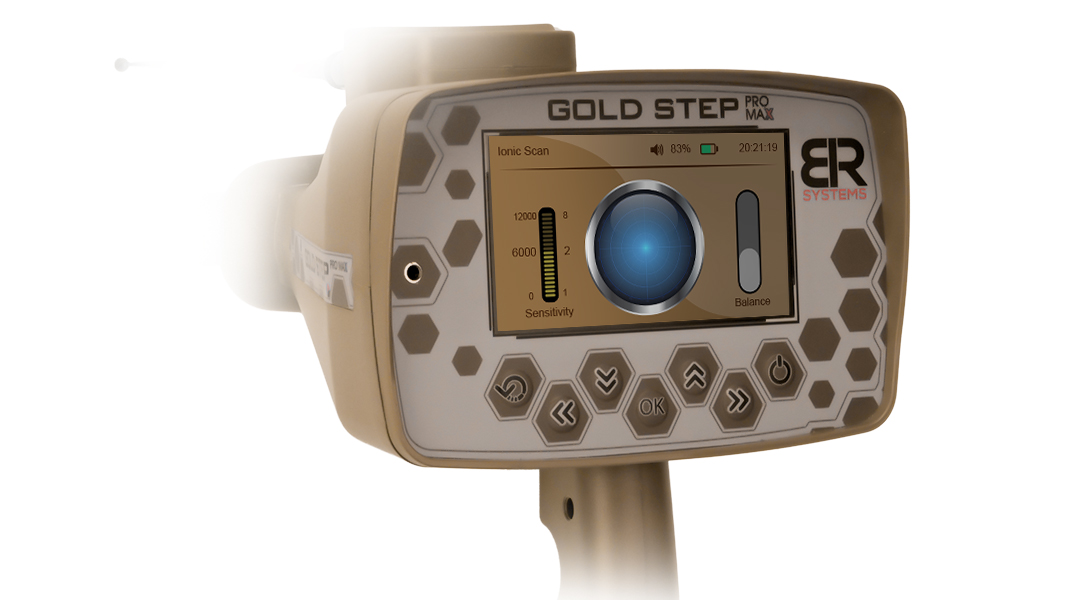 The ionic tracking system can only detect gold buried underground, without other metals.

Through this system, golden treasures buried underground can be detected easier and faster.

You can find potential targets in the area by operating this system and walking with it for a short time until the device starts sending signals in the soil based on stimulating the ionic fields formed around the buried gold, and the interactive process begins between the signals sent from the device and issued by the buried gold metal until the device issues signals Sound alerts, in addition to moving indicators on the screen, indicating the discovery of a golden target in the area, and the user starts walking with the device in the direction of the signal, and this signal increases as the device approaches the target until the target point is reached and standing on it.

Among the advantages of the long-range ion detection system:

Ease of moving and walking with the device in all different lands, whether mountains, rugged rocky areas, or flat lands.

This system is equipped with the new Power max 25 sensor, which is compact and efficient to quickly detect targets and is highly responsive.

The possibility of working in this system in all different weather conditions and is not affected by the severity of wind or ground moisture.

The appearance of visual signals on the screen of the device showing the user its distance and proximity to the target, and these signals increase as the device approaches the target and decrease in the other direction.

Support with voice guidance technology until reaching the target.

The maximum depth of this system is up to 20 meters underground.

Front search area up to 1000 m circular maximum (varies based on target size). 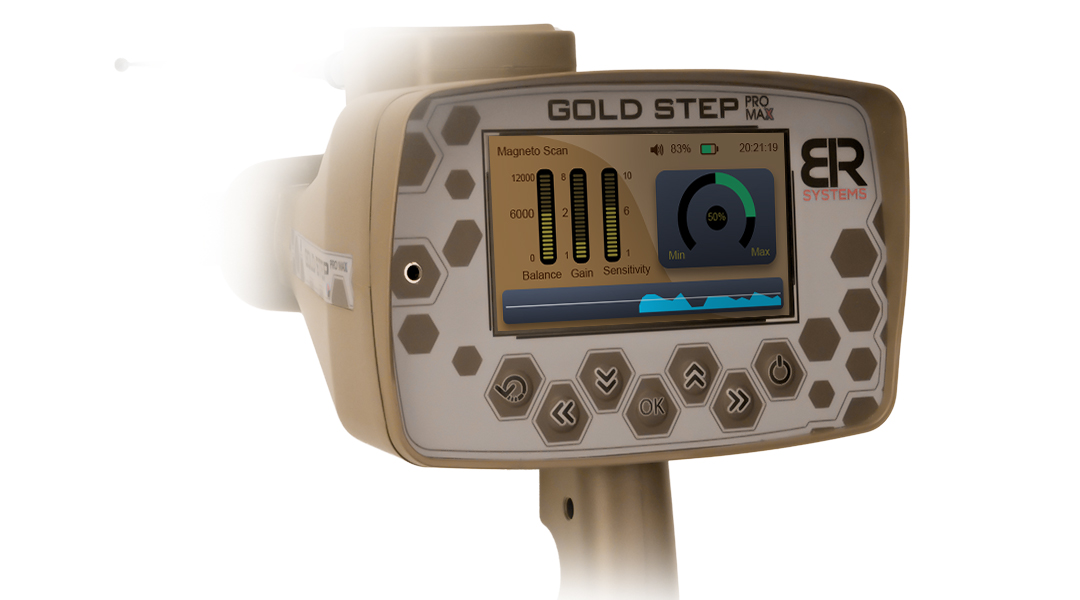 The new Gold Step Pro Max is equipped with magneto scan technology to search for buried metals, caves and underground voids in a vertical way.

This system detects metal targets and caves that have caused a change in the natural magnetic body in the soil, through which this system can detect buried metals and artificial Voids underground and determine it on the screen if the detected target is a buried metal or a void.

This system is equipped with the new Power max 55 sensor, which is small in size and effective to detect targets quickly and with high response.

When a specific target is identified and the excavator begins digging a hole of 2 square meters or more, it is preferable here to use this system within the hole to walk with the target and seek displacement in the hole.

This system helps alert the user of approaching the target based on the indicators on the screen, which change up or down.

The automatic ground calibration (AGC) with soil is an invention of BR Systems. The automatic balancing technology has been added to this system to accurately identify the device on the soil before starting the scan process. Calibration is done within seconds only, which helps the device to know the type of soil to be scanned, and this results in moving signals away The device transmitted completely about all the radioactive signals emanating from the ground, especially from metallic rocks and other similar rocks or mineral dust in general. 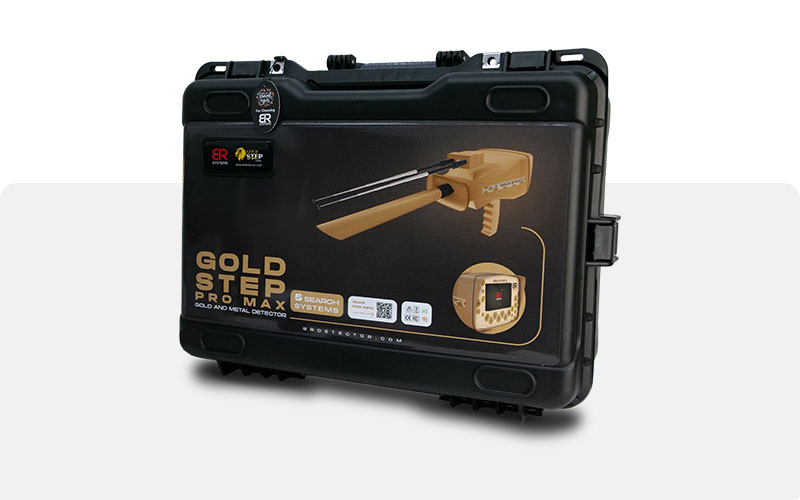 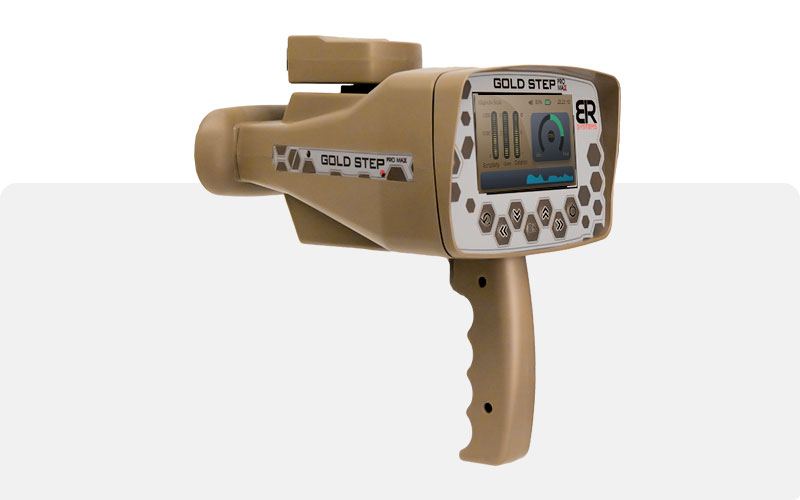 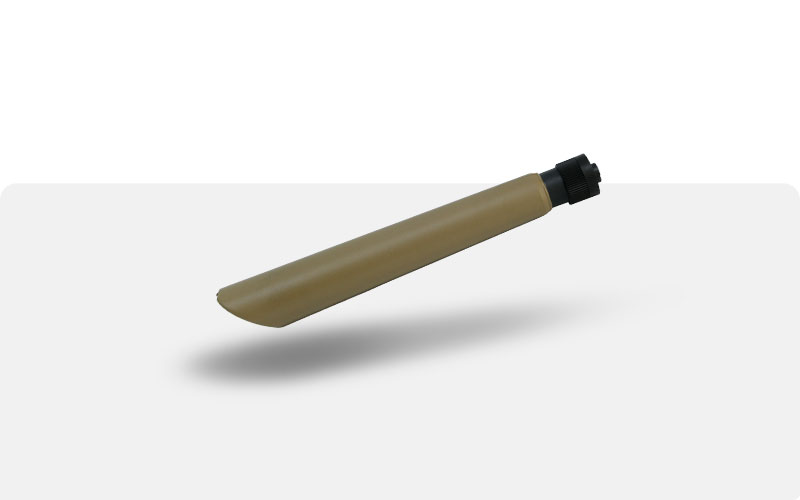 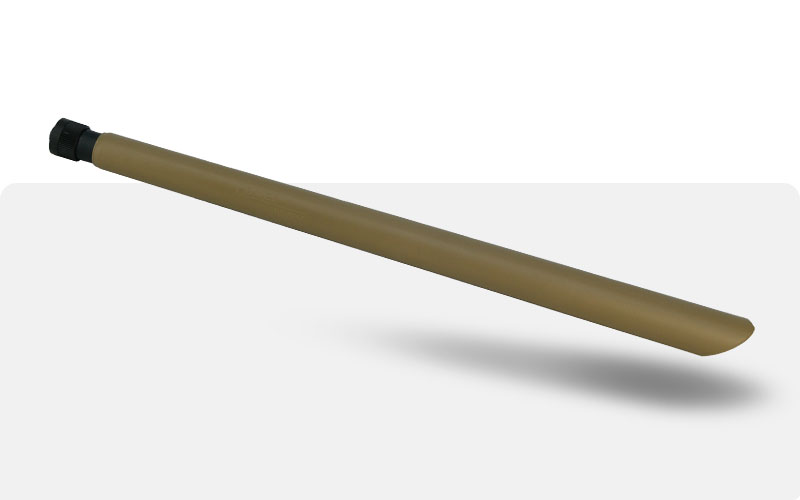 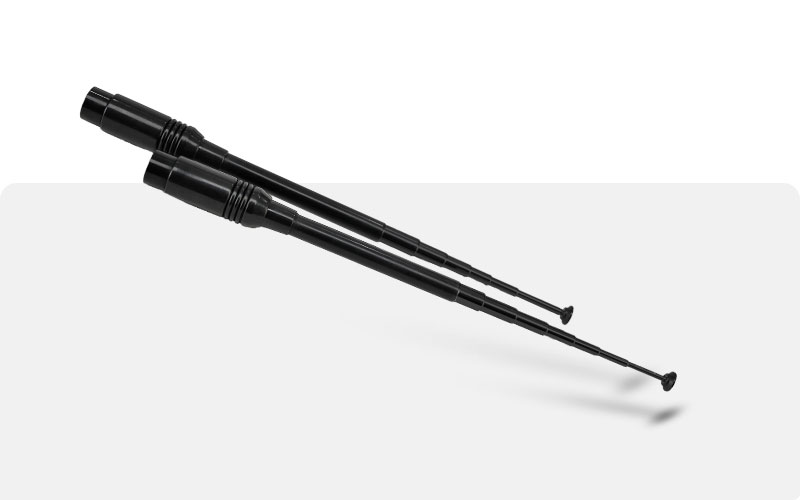 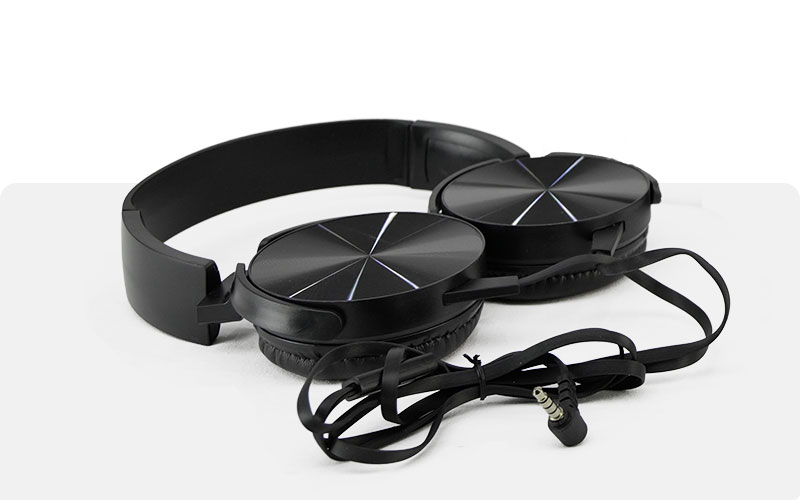 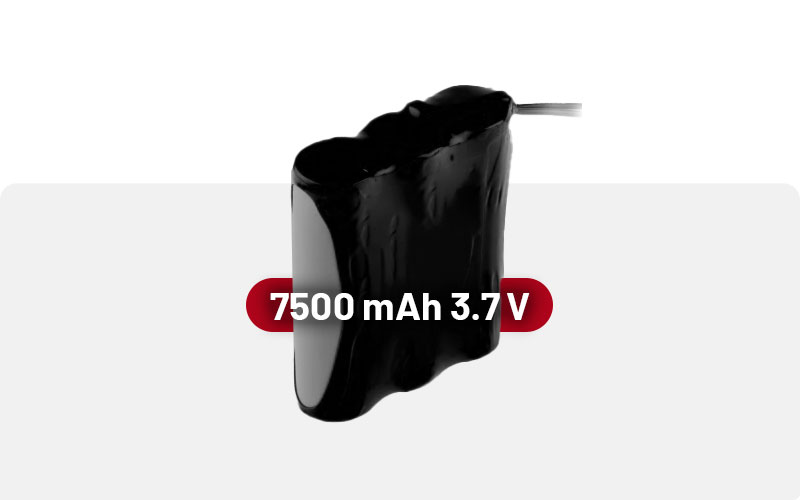 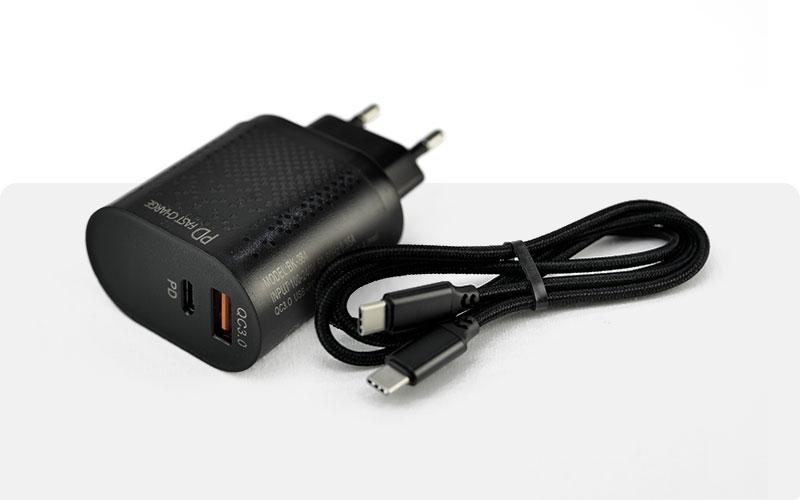 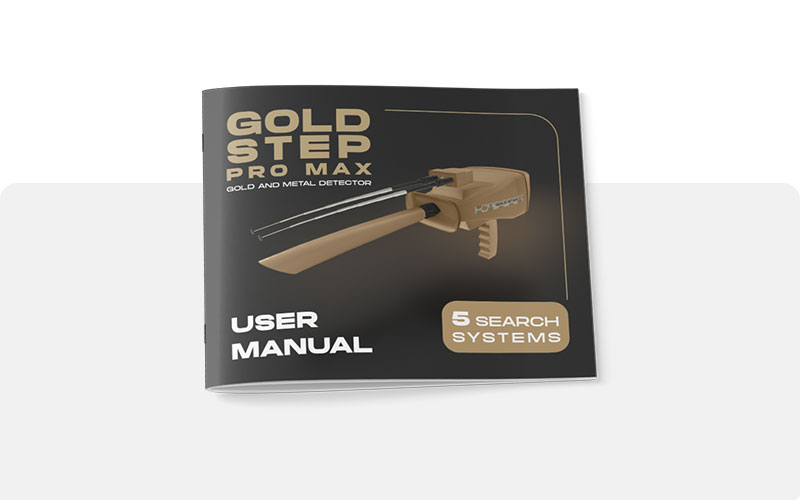 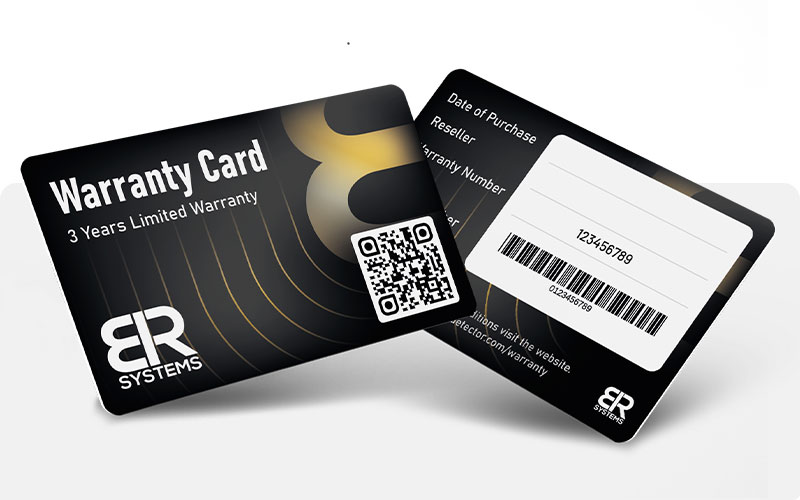 Get answers to all your questions you might have.

We will answer any questions you may have about our online sales right here. 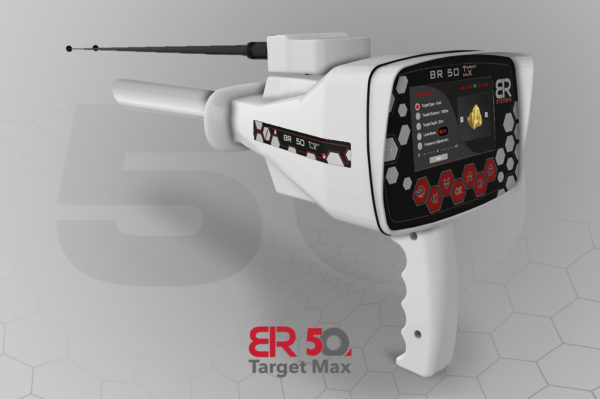 The new BR 50 Target Max device is a new technology integrated between the long-range radar system and the newly developed ionic detection system at BR Systems. Guiding you to the locations of the targets and verifying them completely, this device meets that with a great detection speed.

The BR 100 Pro, the new version, is a new, modern technology that combines detection systems from long distances and vertical detection of targets. This device is a very convenient option, We have developed this device and manufactured it in a way that makes it one of the most important reagents used among researchers and prospectors for treasures buried underground. Royal analyzer Pro of the new version, We developed the Gold detector machine Royal Analyzer Pro device to be the first and best device in the world of 3D imaging devices.